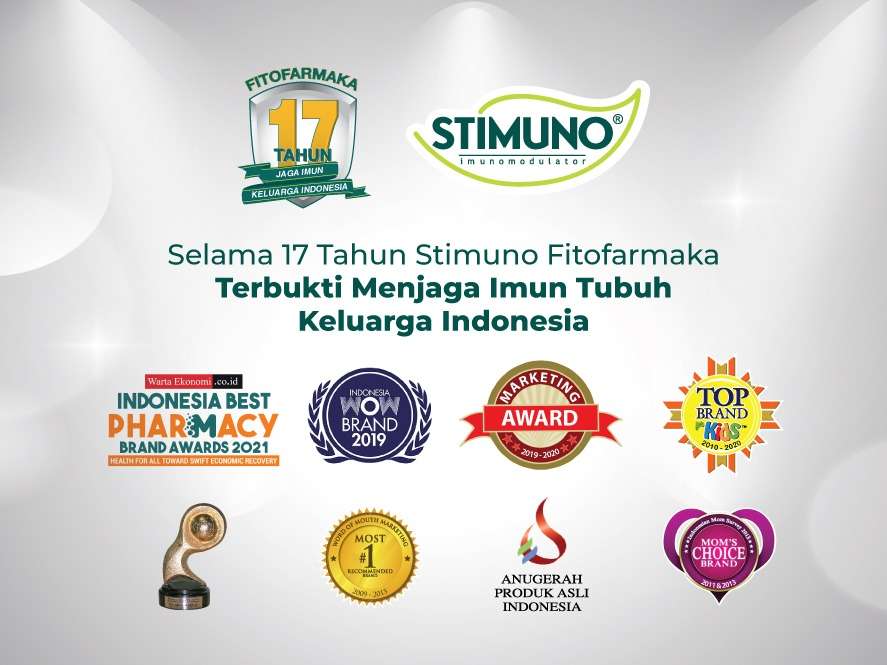 Over the last 17 years, based on the Marketing Authorization Number (NIE) registered in the National Agency of Drugs and Food Control (BPOM), Indonesia records 23 traditional medicines classified as phytopharmaceuticals. Stimuno has been one of the first phytopharmaceuticals in the country since 2005. Being the authentic Indonesian immunomodulatory product and clinically tested for its efficacy, Stimuno received the Indonesia Best Pharmacy Brand Award 2021 from Indonesia news agency, Warta Ekonomi.co.id.

Commercial Director of PT Dexa Medica, V. Hery Sutanto said that consumers have recognized Stimuno as an immunomodulatory product as it received its phytopharmaceuticals status from the National Agency of Drugs and Food Control 17 years ago.

“Stimuno not only is available in Indonesia, but also is exported to other countries such as the Philippines, Nigeria, and Cambodia. Moreover, during the Covid-19 pandemic, public confidence in Stimuno has increased which is reflected by the significant growth in Stimuno’s sales,” explained Hery on Wednesday, 31 March 2021.

Stimuno is the only phytopharmaceutical to improve the body’s immune system that has been clinically tested for both adults and children.

As OMAI phytopharmaceutical, Stimuno has received numerous recognitions and awards, such as the Primaniyarta Award from the Indonesian Ministry of Trade as a product that can enter the export market, Top Brand for Kids for Stimuno Syrup for 11 consecutive years, Original Indonesian Products Award, Mom’s Choice Brand, and Marketing Award for the Experiential Marketing category. The latest award received by Stimuno is the Indonesia Best Pharmacy Brand Award 2021 from Warta Ekonomi.co.id.

As the first phytopharmaceutical immunomodulator in Indonesia, Stimuno has been trusted to maintain the immunity of Indonesian families. This is supported by Stimuno’s role in maintaining immunity to overcome tropical disease outbreaks, such as dengue fever in Indonesia which occurs every year, the MERS infectious respiratory disease outbreak that occurs in the Middle East which has been tested on pilgrims from Indonesia, and currently Stimuno is being tested on COVID-19 patients for mild to moderate symptoms.

In addition, Stimuno which is derived from green meniran leaves (Phyllantus niruri), has gone through a series of tests, such as preclinical trials, toxicity or safety tests, efficacy tests, and clinical trials in various hospitals in Indonesia.

“It turns out that this meniran is active against various kinds of pathogens. Therefore, both specific and non-specific immune systems can be increased using this plant from Indonesia,” said Dr. Raymond. Meniran plants have been through clinical trials for various diseases, one of which is for patients with tuberculosis, hepatitis, acute respiratory infections, and German measles. Dr. Raymond added that meniran is currently being planned for clinical trials for SARS-CoV-2 virus infection with mild to moderate symptoms.

Similarly, an immunologist from Andalas University, Dr. H. Raveinal, SpPD-KAI, FINASIM mentioned the In Silico study on green meniran as an immunomodulator to fight against COVID-19. He explained that the bioactive components of green meniran include cathecin and quercetin.

“Overall, the cathecin and quercetin components in Phyllanthus niruri can inhibit excessive inflammation processes and function as immunomodulators in cases of COVID-19,” said Dr. Raveinal at the Expert Meeting of the Allergy-Immunology Association (PERALMUNI) on Sunday (28/3/2021).

In the discussion, there were several conclusions including that Phyllanthus niruri phytopharmaceutical has been proven both preclinically and clinically in increasing the activity and function of immune system components, both specific and non-specific immunity, in patients with various pathogenic infections, including viruses, bacteria and fungi.

In addition, based on existing clinical studies, the use of Phyllanthus niruri phytopharmaca to patients with respiratory infections such as TB, COPD, URI and Hepatitis B, Vericella, and Candidiasis infections can significantly improve the patient’s immune, thereby increasing the success of therapy and accelerating healing.

Another conclusion is that based on data from various existing clinical studies in increasing the activity and function of immune system components, both for specific and non-specific immunity, Phyllanthus niruri which is a phytopharmaca can be given as one of the therapeutic modalities, namely as adjuvant therapy in patients with cases of OTG (Asymptomatic Persons) and cases of mild symptoms as listed in the COVID-19 Administration Guidelines (3rd edition).