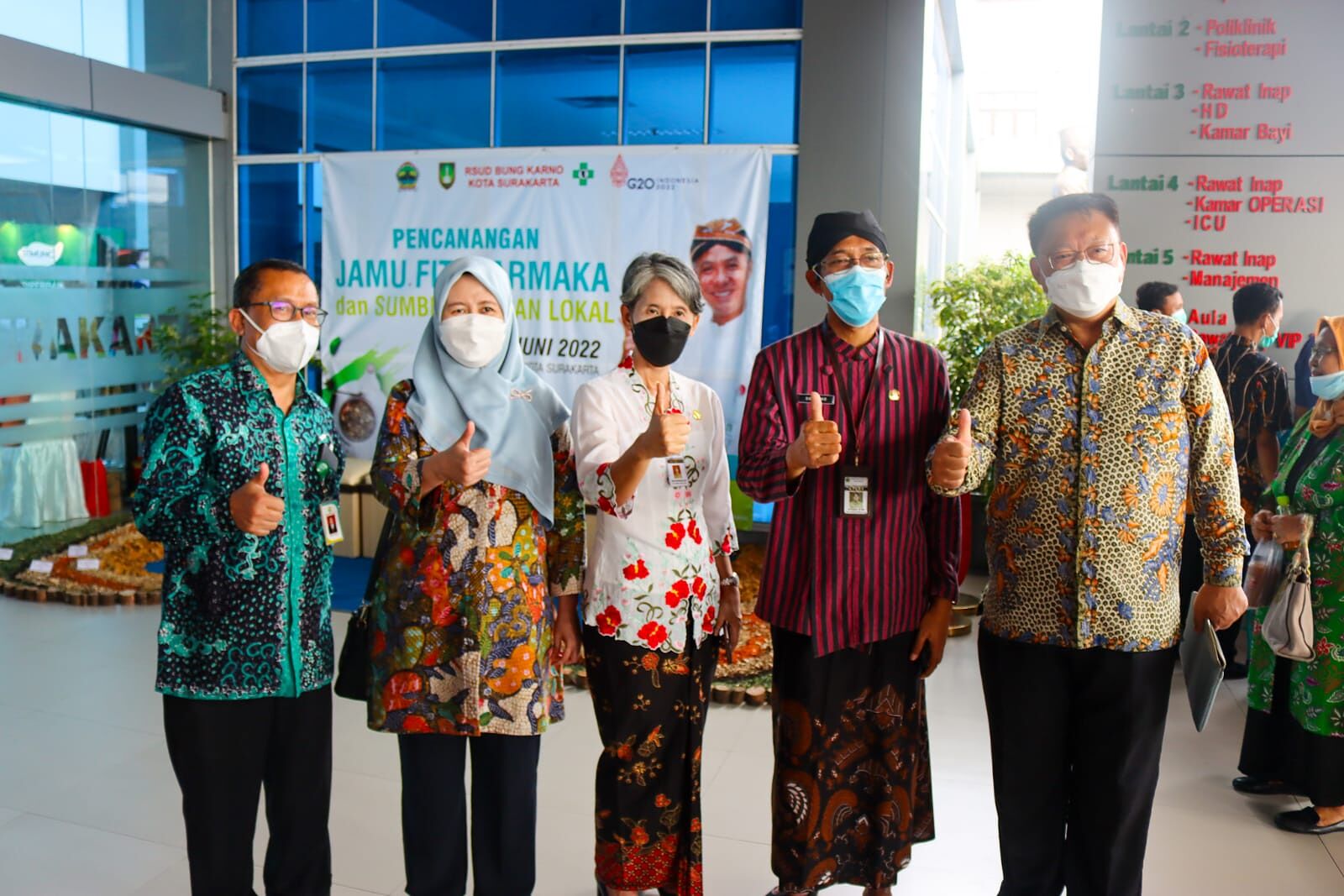 The ‘Bangga Buatan Indonesia’ Movement (BBI) is supported by 35 District/City Health Offices in Central Java Province, which provide the Special Allocation Fund (DAK) and the APBD for health expenditure on Indonesian Indigenous Modern Medicines (OMAI). Thie program is not just to comply with Presidential Instruction (Inpres) No. 2 of 2022 but also the awareness of herbal remedies, both those that are still treated traditionally and those that are handled scientifically.
The Governor of Central Java, Mr. Ganjar Pranowo, addressed the commitment and support of 35 District/City Health Offices in Central Java Province during the “Declaration of Fitofarmaka Herbal Medicine and Local Food Sources” at Bung Karno Hospital, Surakarta, on Thursday, June 9, 2022.
The event is attended by the Central Java Provincial Health Office Director, Mrs. Yunita Dyah Suminar, Corporate Affairs Director of Dexa Group, Mr. Krestijanto Pandji, Commissioner of PT Ferron Par Pharmaceuticals, Mr. Roy Ibrahim, and Head of Corporate Communications of Dexa Group, Mr. Sonny Himawan.
Mr. Ganjar Pranowo, the Governor of Central Java, who was represented by Mr. Sumarno, the Regional Secretary of Central Java, remarked that natural medicine is an Indonesian cultural legacy. He wants people to know the benefits of using pharmaceuticals made from natural substances to improve health.
“Drugs are the only way we can be self-sufficient with Indonesian resources. Drugs that enter phytopharmaceuticals and are prescribed in hospitals or health centres can replace heavily imported ones,” according to Mr. Sumarno, Mr. Ganjar added.
Corporate Affairs Director of Dexa Group, Mr. Krestijanto Pandji, remarked at the same event that Dexa Group is committed to promoting pharmaceutical independence via research and development of medications derived from Indonesian natural materials into IIMM products. IIMM goods are genuine Indonesian items that have been thoroughly examined. IIMM is made up of herbal medicines having the status of Standardized Herbal Medicines (OHT) and Fitofarmaka (clinically tested herbal medication).
At the moment, Dexa Group contributes by offering four IIMM phytopharmaceuticals in six therapeutic categories. Stimuno (immunomodulator), Inlacin (antidiabetic), Redacid (to treat stomach ulcers), and Disolf (stimulating blood circulation) are the four phytopharmaceuticals of the Dexa Group. Mr. Krestijanto stated, “OMAI developed by Dexa Group has been exported to numerous nations in ASEAN, Africa, and America, in addition to serving local demands.”
According to Mr. Krestijanto, the regional government of Central Java’s support for health expenditure on IIMM goods not only provides a push for medical research, particularly phytopharmaceuticals, but also enhances farmer welfare. If this trend continues, Indonesia will be able to achieve pharmaceutical independence.
Several IIMM phytopharmaca raw materials are derived from various locations around the province of Central Java. The raw material for STIMUNO comes from the Klaten, Sragen, and Blora districts, just like the Phyllantus Niruri plant. Bungur leaves were also gathered from farmers in the Sragen, Karanganyar, Kendal, Temanggung, and Wonogiri districts for usage as raw material for Inlacin.
Meanwhile, according to Ms. Lucia Rizka Andalucia, Director General of Pharmacy at the Ministry of Health, the Ministry of Health strongly encourages traditional medicines. That is why the Phytopharmaceutical Formulary was launched a few years ago to use Phytopharmaceuticals and Standardized Herbal Medicines (OHT) more directed and signed.
“Through our numerous collaborations and efforts, we will encourage the use of original Indonesian medications through legislation, the issue of standards, guidelines, and control to ensure that their efficacy is as intended,” Ms. Rizka remarked during the Fitofarmaka Formulary’s debut some time ago.
The Ministry of Health will launch the Phytopharmaceutical Formulary in May 2022. Health institutions can use this formulary to prescribe phytopharmaceuticals to patients.
In the Semarang City Health Office’s territory, Indonesian Indigenous Modern Medicine (IIMM) usage has also been carried out in formal health care institutions. According to Dr. Mochamad Abdul Hakam, the Head of the Semarang City Health Office, the Puskesmas in his region have employed natural remedies to treat patients.
Dr. Hakam recently stated at the Fitofarmaka Symposium, “We firmly advocate the use of herbal medicines, both phytopharmaceuticals, standardized herbal medicines, and herbs for basic health services at puskesmas.”
He also mentioned that the city of Semarang has set aside 11.98 per cent of DAK and APBD funding for purchasing herbal medicines. His party has an integrated drug planning team at the puskesmas level that is entrusted with classifying the use of phytopharmaca, OHT, and herbal medicine with valid distribution permission to increase domestic herbal remedies.