Dexa Group CEO Named as the Most Admired CEO 2019 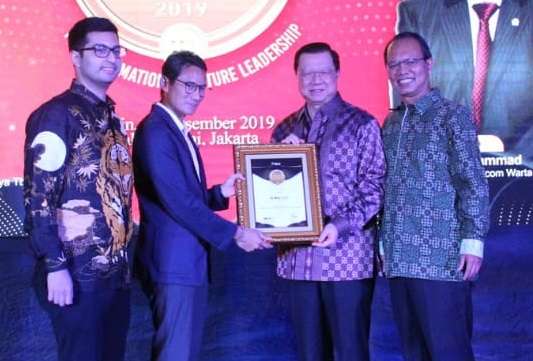 Dexa Group CEO, Ferry Soetikno has been named as the Most Admired CEO 2019 in the Excellent Leadership Pharmaceutical Market category by WartaEkonomi.co.id Research and Consulting. This award acknowledges the CEO’s role in leading a company and constantly bringing something new to the business industry in Indonesia.

The Most Admired CEO Award 2019 was presented by the Founder of PT Saratoga Investama Sedaya, Tbk, Sandiaga Salahuddin Uno and witnessed directly by the CEO and Chief Editor of WartaEkonomi.co.id, Muhamad Ihsan on Monday, 16 December 16 2019, at Balai Kartini Jakarta.

“We are deeply honored and filled with gratitude to receive the tremendous support from the public and from all Dexan who have given their best for the company,” said Ferry Soetikno.

Ferry added that this award is a testament to PT Dexa Medica’s commitment to continue providing high-quality medicines in Indonesia, for the sake of public health at the national, regional and global levels.
According to Ferry, Dexa Group as the largest pharmaceutical company in Indonesia has made real contributions to the health sector, for instance, developing Indonesia Original Modern Medicines and contributing to the success of JKN (national health insurance) program. “This is a part of Dexa’s contribution to our country,” declared Ferry.

Muhamad Ihsan explained the Indonesia Most Admired CEO Award 2019 appreciates CEOs with the best quality and image of being the most ideal CEO based on Warta Ekonomi’s employees and readers perception. The rapid development of digital and information technology in recent years has contributed to the dynamics of corporate leadership in Indonesia.

“Conventional or non-startup companies that have been the backbone of the Indonesian economy still play an important role. These two different types of companies create various leadership styles of a CEO. This dynamic is a reality faced by the business industry both nationally and globally,” he said.

Meanwhile, Sandiaga said that a company’s progress and performance is supported by the ability of the company’s leaders to see opportunities. This will certainly have an impact on the Indonesian economy.