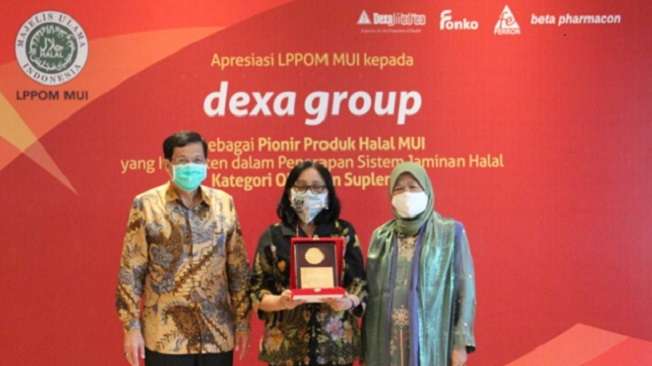 Dexa Group was awarded by the Assessment Institute for Foods, Drugs, and Cosmetics Indonesian Council of Ulama (LPPOM-MUI) as one of the pioneers of halal products which consistently implement an excellent Halal Assurance System in the Medicines & Supplements category.

Oesmena Gunawan said that the award from LPPOM MUI acknowledges the company’s commitment to implementing halal assurance certification, which is essential for the industry and the customers.

“Congratulations to Dexa Group as a halal-certified pharmaceutical company for obtaining a Halal Guarantee certificate. This means that Dexa products have been trusted by scholars, by the public in producing and distributing halal-certified products. Of course, LPPOM MUI gives the highest appreciation, because it is needed by the community and sick people are advised to choose halal drugs. Hopefully, other drug manufacturers will also understand the demand for halal treatment applies for everyone, not only for certain groups of people,” explained Oesmana.

Meanwhile, Dexa Group’s Corporate Quality Director, Retno Tyas Utami stated that the Halal Assurance System has been consistently implemented by all companies within the Dexa Group, from producers to distributors like PT Anugrah Argon Medica.

“All of Dexa Group’s operations have implemented Halal Assurance system, including the 4 big ones which are Dexa Medica in Palembang, PT Fonko International in Cikarang, PT Ferron Par Pharmaceuticals in Cikarang, Beta Pharmacon and DLBS in Cikarang which specializes in herbs. Thanks to LPPOM MUI’s guidance and support, we have reached this level of achievement,” said Retno.
Retno added that this appreciation is a testament to Dexa’s commitment to implementing halal assurance. “Secondly, what we do as a company that has Halal Assurance System has been recognized by others. Third, this is a passion for Dexa to become a company that offers halal products for Indonesia and the international market, “explained Retno.

Dexa Group received appreciation from LPPOM MUI as one of the pioneers of halal products that has consistently implemented an excellent Halal Assurance System in the Medicines & Supplements category, which was officially announced on June 29, 2020. The announcement was delivered live in a virtual event by the Director of LPPOM MUI, Dr. Ir Lukmanul Hakim, and witnessed by the Deputy Minister of Religion of the Republic of Indonesia, H. Zainut Tauhid Sa’adi.