Deputy Minister of Health: OMAI Must Be in the JKN E-Catalog Listing 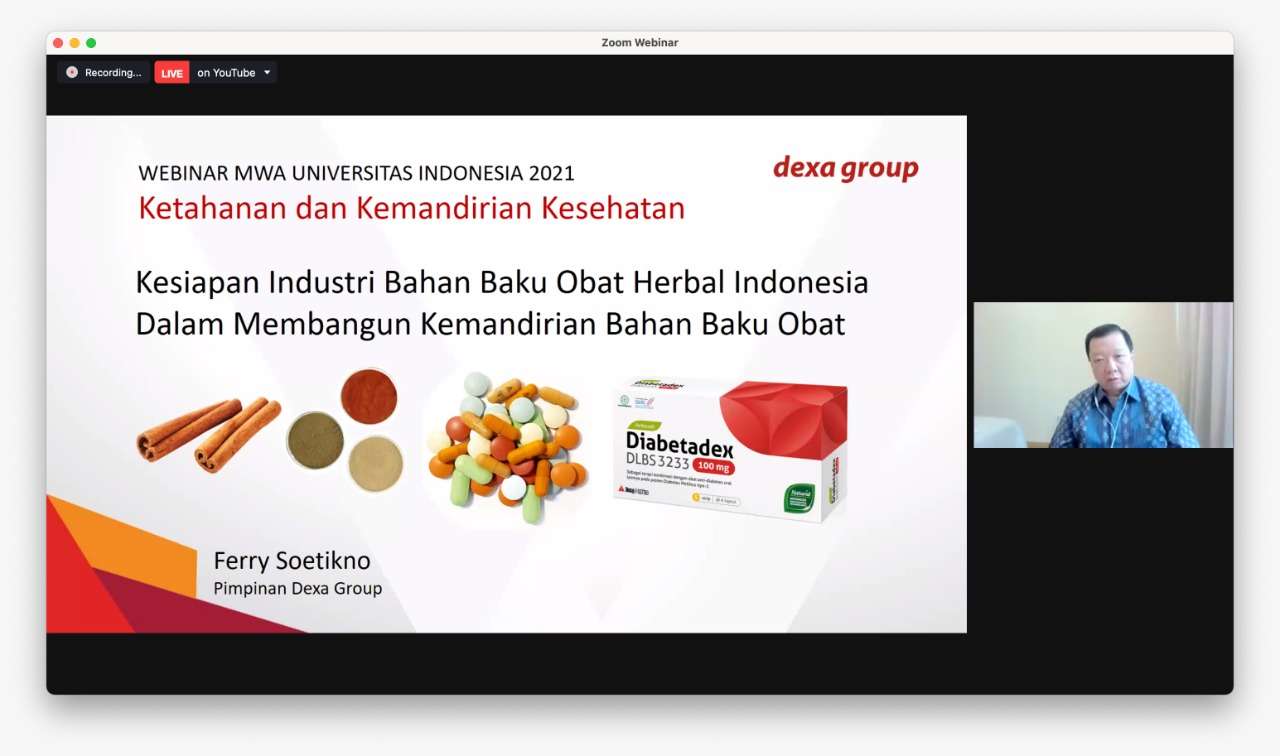 The support for Indonesia Indigenous Modern Medicine (OMAI) to be included in the National Health Insurance (JKN) program continues to be supported. This support surfaced in the 2nd Webinar Series held by the University of Indonesia Board of Trustees (MWA UI) with the theme “Indonesian Health Resilience and Independence” on Thursday, March 25, 2021.

“90 percent of raw materials for medicines are still imported from abroad. Just as happened with drugs, about 94 percent of medical devices circulating in Indonesia are imported products,” said Mr. Ma’ruf when delivering his remarks.

Minister of Research and Technology/National Research and Innovation Agency (BRIN) Prof. Bambang Brodjonegoro stated that one of the national research priorities is Indonesian Original Modern Medicines targeting phytopharmaca drugs or those that have been clinically tested.

However, achieving phytopharmaceuticals, according to Prof. Bambang, is not easy and requires quite a long stage so that the drug is safe for consumption and has adequate efficacy according to the requirements of the Indonesian Food and Drug Administration.

“This is what makes until today not many OMAI are phytopharmaceuticals. Well, we hope that in the future there will be more, but the key will be answered by dr. Dante. The key must be procurement from the government. This manufacturer, if you want to get to the phytopharmaceuticals from OMAI, was expensive research. If the research is expensive, definitely expect a big return.

A large return if there is a large market, the drugs must enter JKN. This has not been done until now, “said Prof. Bambang.

This alignment, according to Prof. Bambang is not only from the government but also must be supported by doctors to prescribe. “Unfortunately. If there are more orders from JKN for BPJS purposes and one more important thing is the awareness of the doctors themselves. Of course, we hope that when we pass clinical trials, doctors will also take sides in using OMAI itself.

If the doctor uses phytopharmaceuticals, then use the drugs from Indonesia. Do not continue to depend on external drugs that have been used in the past. There must be alignments both through the government through regulations and from users. How do we control it so that local medicines can have quality, “said Prof. Bambang.

“So if we provide assistance to the three, then there is no doubt. Exactly what was conveyed by Pak Bambang Brodjonegoro, that how do we take sides after providing assistance to these three things, how do we use these drugs, these drugs must be in the e-catalog listing, JKN listing, and drug formulary so that they are used better “explained dr. Dante.

Dexa Group leader Mr. Ferry A Soetikno conveyed lessons learned from Covid-19 regarding the supply shock problem that occurred in early 2020 to mid-2020, where we imported medicinal raw materials from abroad.

“If at our supplier’s place there is a problem with supply due to one reason or another, for example, import faucets are closed, there is a lockdown, raw materials are not available, ready to be sent but there are problems with transportation, and so on, then we in Indonesia can experience a situation where the supply of raw materials occurs. That is the keyword that must be agreed upon that the urgency to build this independence is non-negotiable, this urgency can be built together, “said Mr. Ferry.

Some of the phytopharmaca drugs produced by Dexa Group are Stimuno made from meniran for immunomodulators, Inlacin made from cinnamon and bungur leaves for diabetic patients, Redacid made from cinnamon as a medicine for stomach disorders, and Disolf made from earthworms as medicine to accelerate blood circulation.

“With this clinical evidence, we are now producing further products in existing pharmaceutical factories so that OMAI or Original Indonesian Modern Medicines are produced with phytopharmaca status or OHT herbal medicines standardized by the POM.

Some of these products have also been exported to foreign countries but now precisely in this Covid-19 situation, now we are thinking further for the independence of medicinal raw materials. How can we use OMAI, the research results are not just herbal medicine, but actually a form of medicine, used in the domestic market, especially in the JKN market, “said Mr. Ferry.

The results of this discussion will be compiled into an academic text as a proposal from MWA UI to the government.