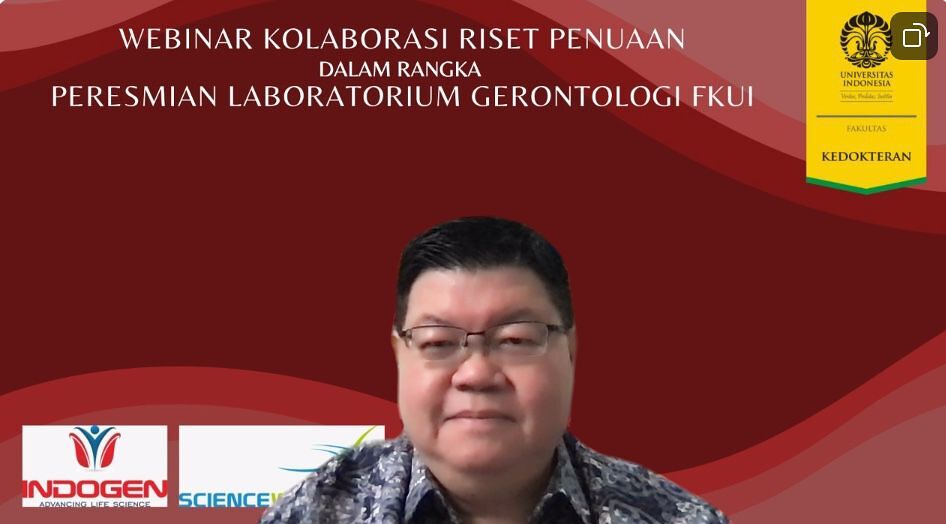 As the world’s fifth-largest elderly population, Indonesia offers a substantial market potential for health goods and services for the elderly. As a result, to enhance the quality of life of the elderly in Indonesia, innovation and research in geriatrics, particularly by native researchers, must be supported.

This statement was conveyed by the Director of Business and Scientific Development of Dexa Group, Dr. Raymond Tjandrawinata, at the Collaborative Webinar for Cell Aging Research in the Inauguration of the FKUI Gerontology Laboratory, Friday (25/3/2022).

“We require experienced researchers so that medications, procedures, and innovative medical technologies may be manufactured in Indonesia. Today, President Jokowi explained why we imported far too much. We import medical equipment and other items. Therefore, we must continue to push for research and innovation,” explained Dr. Raymond.

Dr. Raymond also discussed the leading causes of mortality in different age groups throughout the world, including heart disease (9.4%), stroke (5.7%), COPD (3%), cancer (1.7%), and diabetes (1,5 percent). Domestic researchers, he believes, must devote themselves to the discovery and production of medications to address these health issues. Oncology, immunology, anti-diabetes, neurology, and cardiovascular research are examples of research fields for the elderly.

On the same occasion, Mr. Dante Saksono Harbuwono, Deputy Minister of Health of the Republic of Indonesia, explained that Indonesia’s number of older people had reached 29.3 million (10.8 percent of the total population). In Indonesia, life expectancy (AHH) has grown dramatically in the previous 60 years, rising from 46.66 to 71.72 years.

Nevertheless, the elderly in Indonesia continue to face significant challenges, with 52% of the elderly preferring to seek care independently if they have a condition.

“This is the issue we are dealing with in this situation. Life expectancy rate is expanding, but the elderly have a high risk of serious health issues, “Mr. Dante said.

The government issued Presidential Decree No. 88 of 2021 to improve the health and quality of life of the elderly. Increased nutritional status and healthy lifestyles, expanded health services for the elderly, reduced elderly morbidity, and expanded the scope of long-term care for the elderly are the indications.

“Infrastructure and funding in senior care are required. Then, even though things created domestically are less expensive, the expense of caring for the elderly remains quite high. Digital technology will also assist the government and healthcare providers in treating the elderly” Dr. Raymond said.

He highlighted that Indonesia has a middle-aged generation with a high income, which has the potential for senior progress in the future.

“Health care facilities, nursing homes, medical gadgets, and geriatric care are examples of products that should be prioritized. Nursing care, toilet security facilities, senior diapers, and anti-aging treatments are among the other goods being researched in Indonesia,” He elaborated.

“The number of geriatric patients will grow, and we will require a comprehensive approach to guarantee they have a high quality of life. Not only is the geriatric rate growing, but so is life expectancy. Drug usage is also still minimal, even among the elderly. Indonesia must raise healthcare expenditure on investment and research in geriatrics to improve people’s quality of life in the future,” Dr. Raymond stated.