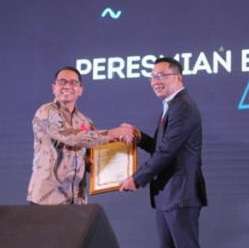 Dexa Group through PT. Ferron Par Pharmaceuticals received the Annual Corporate Social Responsibility award from the West Java Provincial Government on November 18, 2019. This award was given for the PT. Ferron Par Pharmaceuticals’ consistency in implementing social and environmental responsibility programs in the West Java area via Dharma Dexa activities.

The award ceremony was held in conjunction with the Inauguration of West Java CSR Projects which had been carried out throughout 2018 – 2019. The Governor of West Java, Ridwan Kamil directly presented the award to the Manager of Dharma, Dexa Mateus Ramidi at Trans Luxury Hotel Bandung on Monday, November 18, 2019.
​
“We are very happy to receive the award directly from the Governor of West Java Ridwan Kamil. This award is a testament to Dexa Group’s commitment in building and improving public health, education and welfare,” said Mateus Ramidi.
​
In his remarks, Ridwan Kamil stated that West Java is very pleased to welcome the development of various business sectors as long as the environment of West Java remains conducive with CSR programs in various regions in the province.
​
“CSR activities are indeed a social investment by companies. Currently, West Java continues to actively build infrastructure on a large scale. Investment continues to grow, making West Java the number one investment destination in Indonesia,” said Ridwan Kamil.
​
PT. Ferron Par Pharmaceuticals through Dharma Dexa has received at least 4 awards from the West Java Provincial Government as a company that is always active in carrying out social and health development activities together with the Cikarang community.