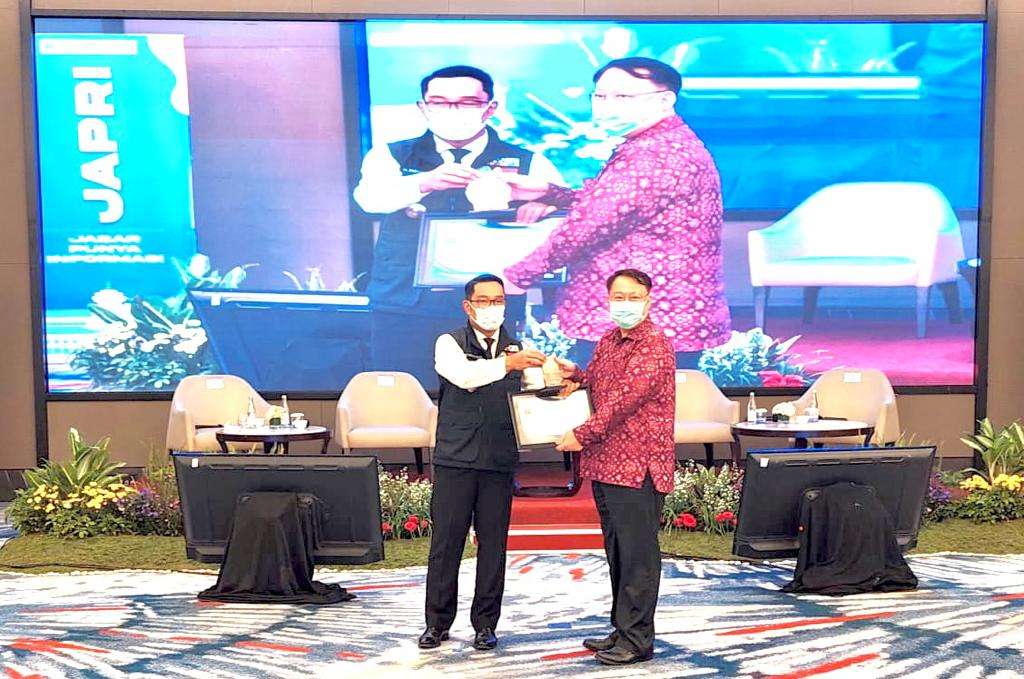 Dexa Group through Dharma Dexa has been awarded Corporate Social Responsibility by the West Java Provincial Government in recognition of their contributions to the implementation of social and environmental responsibility programs in the West Java Area.

The virtual ceremony was held by Regional Development Planning Agency/Bappeda of West Java Province through CSR Forum. The award was presented directly by the Governor of West Java, Mr. Ridwan Kamil, to the Corporate Affairs Director of Dexa Group, Mr. Krestijanto Pandji, on Thursday, December 23, 2021, at the Jasmine Ballroom, Pullman Hotel, Bandung.

“We are very grateful to receive an award from the Governor of West Java Ridwan Kamil. This award is proof that Dexa Group is always committed to building and improving health, education and community welfare through CSR programs that are in line with government programs,” said Mr. Krestijanto after receiving the award.

Dexa Group was recognized with a CSR Healthcare Award category and also named Top Program in the same field of category.

Mr. Ridwan Kamil in his speech said that the West Java Provincial Government opened the door as many as possible for companies operating in its territory to contribute through CSR programs. He really appreciates companies that have aligned their CSR activities with government programs so that they are sufficiently more precise.

“The fifth principle of Pancasila, Keadilan Sosial bagi Seluruh Rakyat Indonesia (Social Justice for All Indonesian People) serves as the foundation for CSR. According to the economy principle in Pancasila, there is an addition which despite being able to compete, you can also cooperate with each other,” said the Governor, who is familiarly called Kang Emil.

Furthermore, Mr. Ridwan Kamil added that companies can implement CSR programs in response to current conditions or to anticipate future events. He explained that the decline in Covid-19 cases in Indonesia would force the government, both central and regional, to focus on economic recovery policies in 2022.

He also stated that the West Java Provincial Government has compiled a list of CSR programs in the CSR Forum. As a result, he encouraged companies to participate and engage in the forum. Dexa Group, as a company with production facilities in West Java, has been an active contributor to the West Java CSR Forum.

Dexa Group through Dharma Dexa has received at least five awards from the West Java Provincial Government for its constant involvement in social and health development initiatives with the residents of Cikarang, Bekasi, West Java.