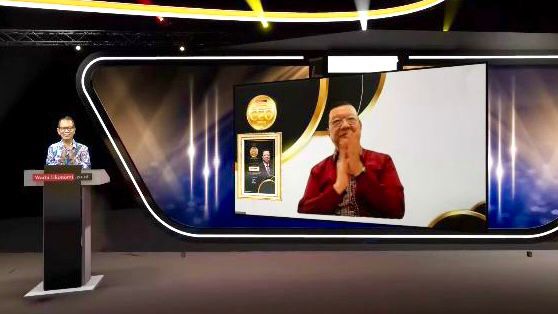 For his leadership that has allowed the company to adapt successfully, make breakthroughs, and continue to make developments to provide a positive stimulant to the economy in Indonesia, Dexa Group CEO Mr. Ferry Soetikno was awarded the Indonesia Most Acclaimed CEO 2022 in the pharmaceutical category from WartaEkonomi.co. id.

Indonesia Most Acclaimed CEO 2022 was presented virtually by the CEO and Chief Editor of WartaEkonomi.co.id Mr. Muhamad Ihsan and received by Dexa Group CEO Mr. Ferry Soetikno, on Friday, 16 December 2022.

“Mr. Ferry Soetikno deserved this award for what he did as Dexa Group’s leader. President Jokowi while in Brussels, Belgium a few days ago insisted that Indonesia must downstream and OMAI Fitofarmaka as part of domestic needs which is also exported to foreign countries. As a leader, Mr. Ferry was able to strengthen the health ecosystem so that Dexa Group succeeded in penetrating products to various continents,” explained Mr. Muhammad Ihsan.

CEO of Dexa Group, Mr. Ferry Soetikno, expressed his gratitude and appreciation for this recognition, and was committed to supporting the collaboration that has been established with Warta Ekonomi in improving the health of Indonesian people. This is in accordance with the foundation of the Dexa Group, namely Expertise for The Promotion of Health.

“I am very honored along with all of Dexan to receive this award. In the last three years we have together navigated the COVID-19 pandemic which is certainly not easy, especially in terms of the independence of medicinal raw materials which we have proven and used by the government with the TDKN concept, Bangga Buatan Indonesia so we thank our government for being involved in developing this independence,” said Mr. Ferry Soetikno.

Mr. Ferry continued that regarding the concept of industry 4.0 where the Dexa Group factory uses the concept to increase competitiveness and stability in the company’s transformation towards automation. In addition, Dexa Group is building a digital-based health ecosystem, for example GoApotik and TemanBumil which have gained the trust of consumers.

“We will continue to build the nation’s competitiveness, thank you WartaEkonomi for continuing to provide coverage, views and inspiration for the future. We will continue to implement our core purpose, Expertise for the Promotion of Health,” concluded Mr. Ferry.

The awarding event was also witnessed by the Minister of Tourism and Creative Economy of the Republic of Indonesia, Mr. Sandiaga Uno. In his remarks, Mr. Sandiaga positively welcomed this award and congratulated all the leaders/CEOs/main directors who won this award.

“Congratulations on your success in bringing change to the company so that it can recover and be able to develop during the pandemic,” said Mr. Sandiaga.

Indonesia Most Acclaimed CEO 2022 warded to CEOs/President Directors/Main Directors who continue to make progress and provide positive stimulants to the economy in Indonesia and their achievements in leading the company.