Dr. Raymond Rubianto Tjandrawinata, a leading figure in Indonesia Indigenous Modern Medicine (OMAI), was awarded the honorary title of Adjunct Professor in Pharmaceutical Biotechnology by the Indonesian Catholic University (Unika) Atma Jaya Jakarta. Dr. Raymond Rubianto Tjandrawinata has demonstrated a scientific discovery and contribution to the advancement of pharmaceutical biotechnology, earning him this accolade for the first time from Unika Atma Jaya.

The ceremony to present this honorary title was placed on Tuesday, November 15, 2022, at Atma Jaya Catholic University, Campus 3 BSD, Banten. Additionally present at the event were the Atma Jaya Catholic University’s Deputy Chancellor for Research and Cooperation, Mr. Dr. Yohanes Eko Adi Prasetyanto, the Dean of the Faculty of Biotechnology, Mr. Yogiara Ph.D., the Head of the Dexa Group, Mr. Ferry Soetikno, and the Head of Dexa Medica, Mr. V. Hery Sutanto.

Since Atma Jaya Catholic University was founded 62 years ago, the title of Adjunct Professor has never been granted, according to Dr. Yohanes Eko Adi Prasetyanto, Deputy Chancellor for Research and Cooperation at the institution. Dr. Raymond received this honorary title in recognition of his work in academics and industry.

“Atma Jaya Catholic University has achieved a new milestone by granting Mr. Raymond the title Adjunct Professor. Unika Atma Jaya was listed as the third-best private institution in Indonesia a while back by QS Asia Pacific. This is intimately tied to how we raise academic standards through tri dharma and research, particularly by granting Adjunct Professor titles. Hopefully, Mr. Raymond’s appointment as an Adjunct professor at Atma Jaya Catholic University would improve academic standards and establish a new academic tradition there,” Dr. Yohanes Eko stated.

At the same time, Mr. Yogiara, Ph.D., Dean of the Faculty of Biotechnology at Atma Jaya Catholic University, stated that Mr. Dr. Raymond is an inspiration to both teaching staff and students because he frequently has fresh, original ideas and is actively engaged in research with both lecturers and students.

At the same time, Mr. Yogiara, Ph.D., Dean of the Faculty of Biotechnology at Atma Jaya Catholic University, stated that Mr. Dr. Raymond is an inspiration to both teaching staff and students because he frequently has fresh, original ideas and is actively engaged in research with both lecturers and students.

“Pak Raymond has significantly contributed to the country, particularly in medicines and phytopharmaceuticals under Dexa Medica. I congratulate Dexa Medica, Unika Atma Jaya, and Mr. Raymond. We hope that this position will help us all grow and that Mr. Raymond will continue encouraging us all,” Mr. Yogiara, Ph.D., stated.

Dr. Raymond expressed gratitude to Unika Atma Jaya and Dexa Group for their up-to-date support in their joint efforts to conduct biotechnology and pharmaceutical research and development, particularly concerning the natural raw materials derived from Indonesia’s biodiversity for the creation of Indonesia Indigenous Modern Medicine.

“Today is an important day in my life. I appreciate the cooperation of all parties in granting this honorary degree, which was undoubtedly difficult and filled with obstacles. Our zeal for educating the nation’s youth and the next generation about the advancement of biotechnology and pharmaceuticals is shared by the lecturers and colleagues at Unika Atma Jaya,” according to Dr. Raymond. 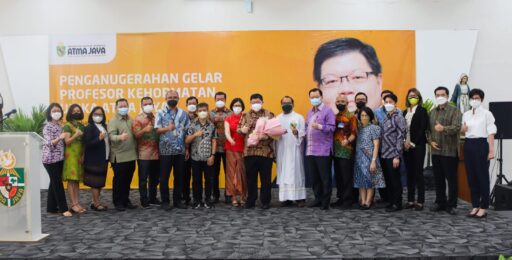 In addition to serving as a lecturer and researcher at the Faculty of Biotechnology at the Atma Jaya Catholic University of Indonesia, Prof. Dr. Raymond Rubianto Tjandrawinata is the Director of Research and Business Development for the Dexa Group. He is credited for helping to create the Indonesia Indigenous Modern Medicines made by Dexa Group. Due to research advances pioneered by Prof. Raymond and researchers at Dexa Laboratories of Biomolecular Sciences, there are currently 19 Original Indonesian Modern Medicine products available in the form of Phytopharmaca and Standardized Herbal Medicines (OHT).

During his career, Prof. Raymond has contributed to several organizations, including SmithKline Beecham Pharmaceuticals in California and NASA’s Kennedy Space Center in Florida. He is now the Dexa Group’s Director of Research and Business Development, the Executive Director of Dexa Laboratories of Biomolecular Sciences, and a Dexa Medica Group’s Corporate Executive Committee member.

Prof. Raymond has published in more than 150 international publications, has 30 Google Scholar and 22 Scopus citations in his favor, and has a Sinta Score of 6,980 total, placing him first at Atma Jaya University. The Directorate General of Intellectual Property Rights gave him forty-seven patents for his work. At the same time, 16 more were from patent offices in other nations.