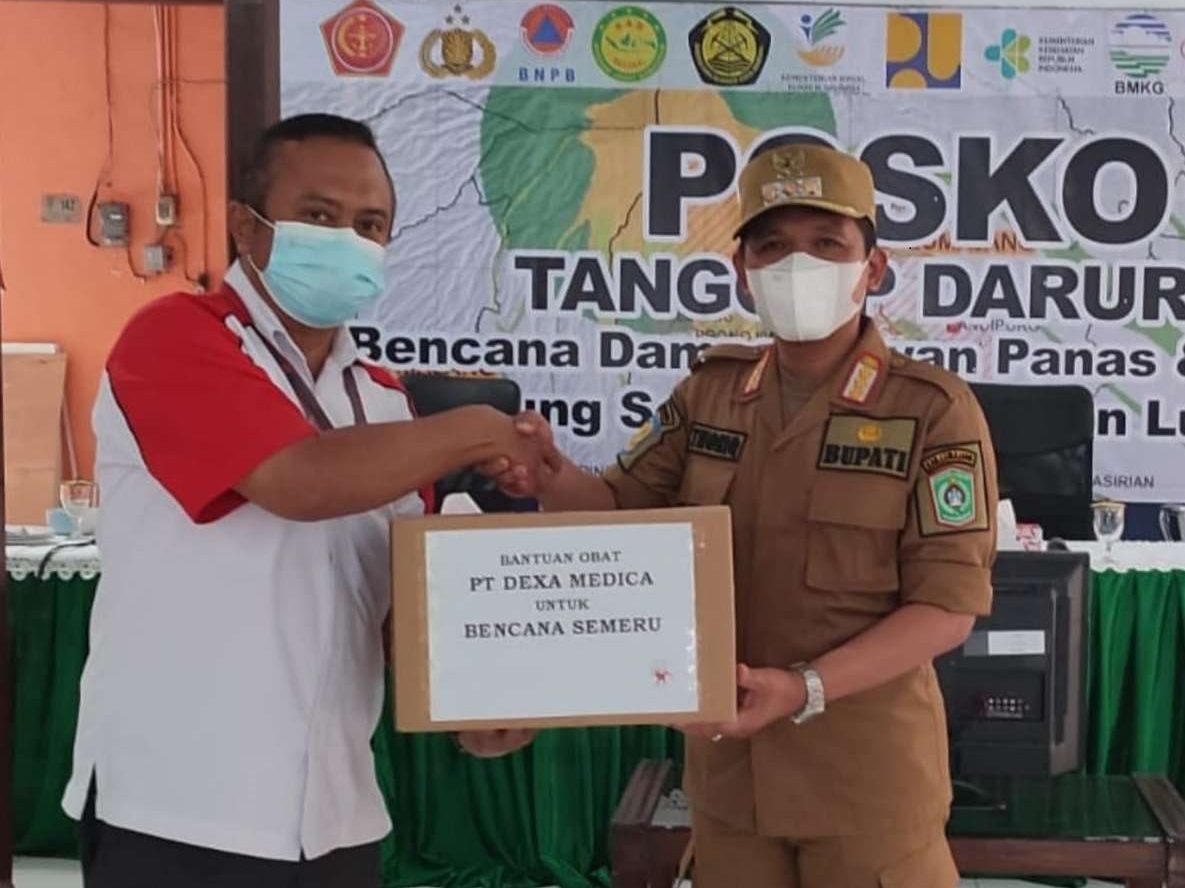 Symbolic donations in the form of medicines were handed over by representatives of Dexa Group Sales Manager Generic OGB Dexa East Java – Makassar Mr. Bayu Pangarso and received by the Regent of Lumajang Mr. Thoriqul Haq. the Head of the Central BNPB, Lt. Gen. Suharyanto, also present and witnessing the handover of the donation at the Emergency Response Post for the Impact of Hot Clouds and Mount Semeru Falls in Pasirian District, Lumajang Regency, East Java, Monday, December 6, 2021. The Head of Central BNPB and the Regent of Lumajang expressed their gratitude for the assistance provided by Dexa Group.

Sales Director OGB – Zeta PT Dexa Medica Mr. Tarcisius T. Randy said that the donations were a form of Dexa Group’s concern and support given to the community, especially residents affected by the natural disaster of the Mount Semeru eruption. “On behalf of the Dexa Group, I am concerned about the natural disaster of the eruption of Mount Semeru that occurred which resulted in a number of casualties and affected residents. Dexa Group continues to support the needs of the government and also the people affected by the eruption of Mount Semeru, who are currently in dire need of help related to health. Therefore, according to our philosophy of Expertise for the Promotion of Health and one of our core values, Deal with Care, Dexa Group has participated in donating a number of medicines through BNPB,” said Mr. Tarcisius.

The donations from Dexa Group are in the form of 16 types of Dexa OGB medicines totaling 73,152 in tablet, syrup, and cream preparations such as Amlodipine Besilate, Mefenamic Acid, Betahistine, Desoximetasone, Diclofenac Sodium Enteric, and so on. In addition, 9,360 stick packs of HerbaKOF cough syrup were also donated, which is useful for relieving coughs and relieving throat due to respiratory disorders.

As one of the pharmaceutical companies in Indonesia, Dexa Group has an important role in providing quality medicines for the community and helping the government’s needs. Not only donating medicines for residents affected by natural disasters, but in the midst of the Covid-19 pandemic, Dexa Group also helps the Indonesian government overcome the vulnerability of the community due to the pandemic by presenting various kinds of medicines for Covid-19 patients which have been distributed to more than 500 hospitals. Covid-19 referrals in Indonesia.