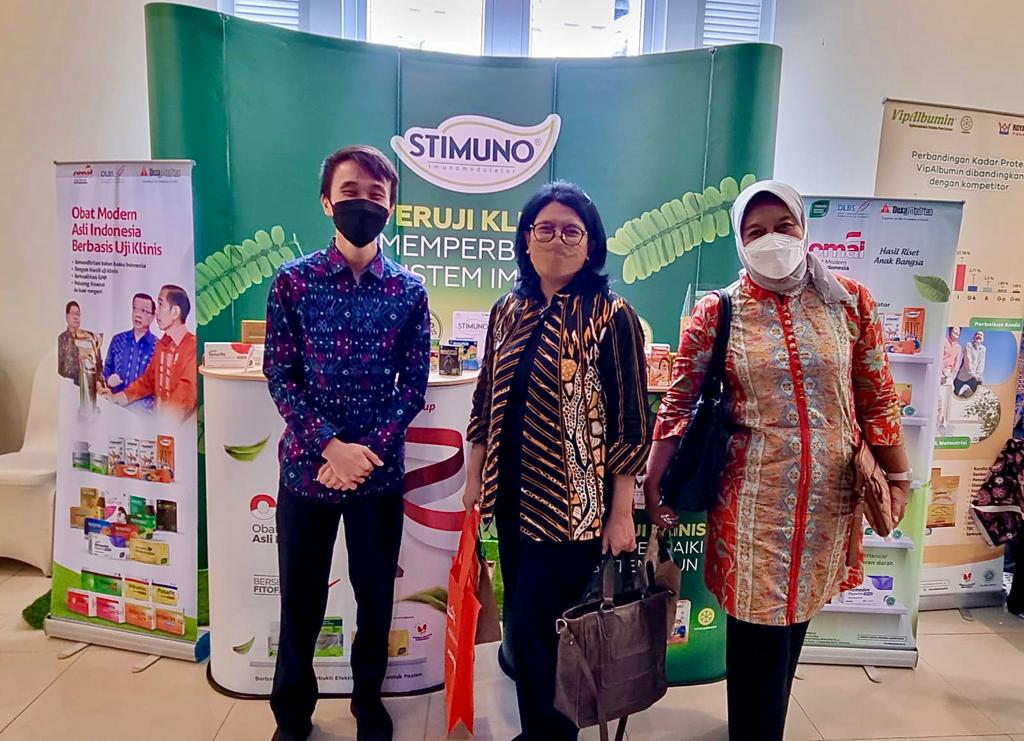 On the same occasion, Mr. Budi Gunadi Sadikin, Minister of Health, encouraged the industry to develop medications made from natural ingredients to be promoted to phytopharmaceuticals with good efficacy, quality, and safety and have been standardized. The statement is delivered by Mrs. Agusdini Banun Saptaningsih, Director of Pharmaceutical Production and Distribution of the Ministry of Health.

“Biodiversity and natural resources are abundant in Indonesia. Following the demands of authentic Indonesian raw resources, the government chooses phytopharmaceuticals. There are five phytopharmaceuticals in 6 therapeutic domains. These include albumin level boosters, antidiabetic, antihypertensive, and stomach ulcer treatment,”

According to Mrs. Agusdini, the funding sources to provide phytopharmaceuticals are only through several funds. These are special allocation funds (DAK), capitation funds, the Regional Revenue and Expenditure Budget (APBD), and others.

“The National Health Insurance (JKN) DAK budget for all medications is Rp. 1.4 trillion in 2022, with some of the amount going toward procuring phytopharmaceuticals and OHT. The proportion of conventional medications currently absorbed in hospitals is still low, with rates of 4.6% for pulmonary tuberculosis, 2.7% for hypertension, 2.5% for acute myocardial infarction, 2% for ARI, and 1.2% for stroke. We support expanding the use of conventional medicine in healthcare institutions,” the speaker stated.

“Celery and mustache leaf extracts, fractions from bungur leaves and cinnamon bark, cinnamon bark, meniran herb extracts, snakehead fish extract, citrus fruits, and turmeric rhizomes are just a few of the phytopharmaceutical preparations that will be present. Priority is given to the usage of PDN in the e-commerce process when buying domestic goods with a TKDN value of at least 50%,” she added.
Obstacles to the Development of Phytopharmaceuticals

There are a number of obstacles the industry must overcome to produce phytopharmaceuticals, aside from the government’s commitment to promoting their usage to achieve pharmaceutical resilience and independence. According to Ms. Dwi Ranny Pertiwi Zarman, chairperson of the Association of Herbal Medicine Entrepreneurs, the challenge in developing phytopharmaceuticals is related to research and development costs. Another challenge is associated with the certainty of absorption in health care facilities which is still relatively small.

She also added, “By the COVID-19 outbreak, Stimuno orders most of its supplies from DAK and APBD suppliers from July 2021 to July 2022. Additionally, there are purchases for Dehaf, HerbaKOF, Hepagard, and Hemorogard. Drug planning/RKO will refer to the National Formulary, Formulary District, and the most recent Fitofarmaka Formulary, making the procurement procedure for the Health Office, especially for traditional medicines, easier,”.

Support from the Industry and Association for Phytopharmaceuticals
Mr. Lilik Yusuf Indrajaya, Secretary General of the Indonesian Pharmacists Association (IAI), commented on the difficulty of phytopharmaca absorption and the need for pharmacist education to guarantee that patients receive appropriate, safe, high-quality, effective, and reasonably priced phytopharmaca. Mr. Lilik thinks that prescriptions for phytopharmaceuticals from physicians will become more common in pharmacies and healthcare settings.

“We applaud the Ministry of Health’s initiative to develop a sector-specific e-catalog for the health sector to make it simpler for regional health offices to spend on health for phytopharmaceuticals. Dexa is prepared to support many phytopharmaceutical products, including Inaclin and Stimuno, depending on the demands,” said Mr. V. Herry Sutanto, President Director of PT. Dexa Medica.