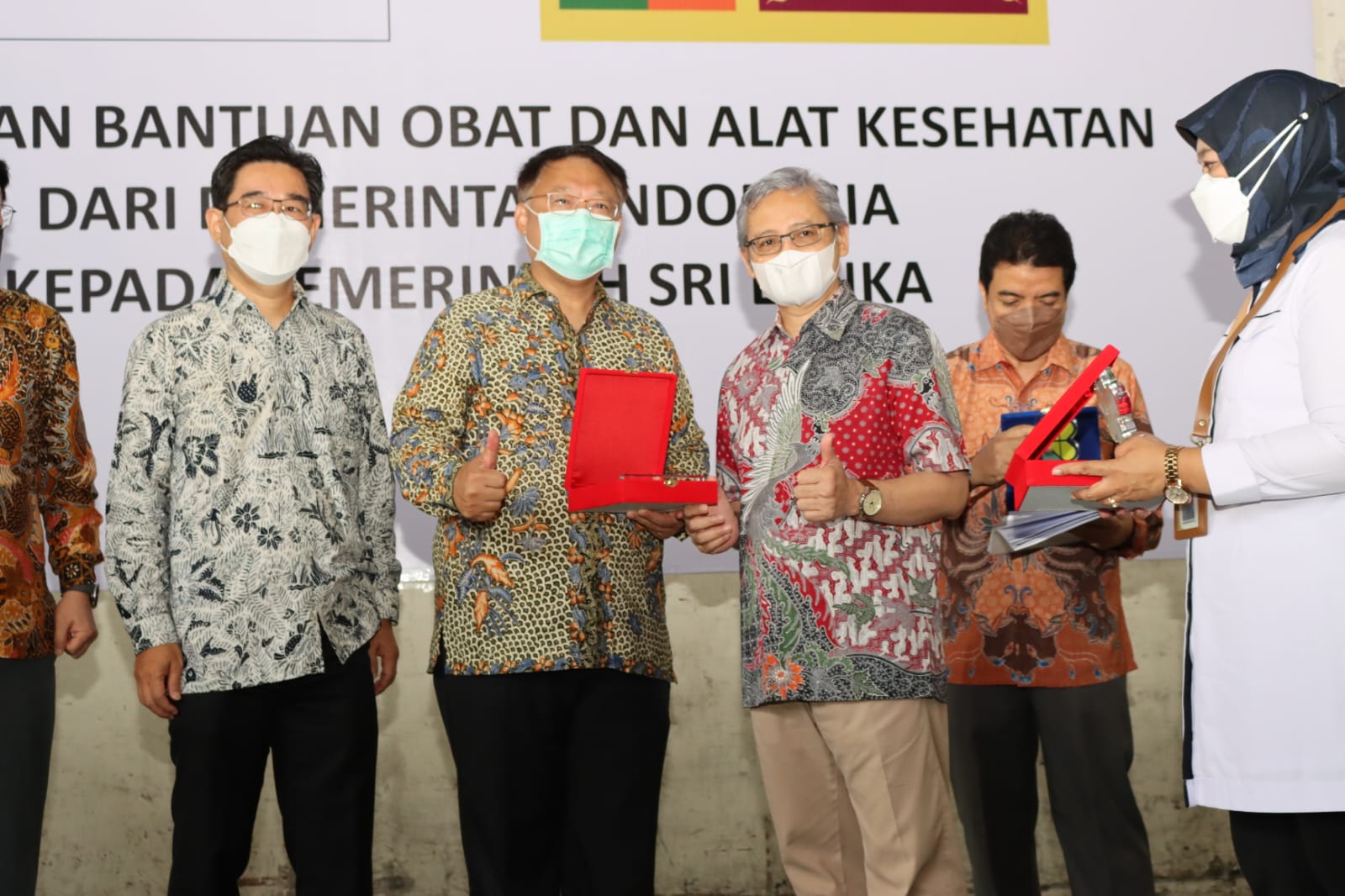 The economic crisis that hit Sri Lanka caused a lack of supplies of medicines in the country and encouraged the concern of pharmaceutical companies in Indonesia to donate medicines and medical devices, including Dexa Group. The World Health Organization authorities submitted the request to the Indonesian government through the Indonesian Ministry of Foreign Affairs and the Ministry of Health of the Republic of Indonesia.

The symbolic donation was held at the Soekarno-Hatta Airport Cargo Gate Warehouse, Tangerang, on Thursday, April 28, 2022. This event was attended by The Ambassador of Sri Lanka to Indonesia, Mrs. Yasoja Gunasekera, Secretary-General of the Ministry of Health, Mr. Kunta Wibawa Dasa Nugraha, Director of Pharmaceutical Production and Distribution of the Ministry of Health, Mrs. Agusdini Banun Saptaningsih, and representative of the Ministry of Foreign Affairs of the Republic of Indonesia. Also, the Chairman of Dexa Group, Mr. Ferry Soetikno, and Corporate Affairs Director of Dexa Group, Mr. Krestijanto Pandji.

“Sri Lanka is currently experiencing a shortage of healthcare supplies. Sri Lanka is both a friend and a strategic partner. We are sending our heartfelt appreciation and gratitude to everyone who has assisted us,” said Mr. Kunta Wibawa.

According to Mrs. Agusdini, donations from Indonesian pharmaceutical companies have been highly appreciated by WHO. The donations distributed from pharmaceutical companies are cancer drugs worth Rp 13.5 billion. Meanwhile, medical device manufacturers gave Rp 9 billion in medical equipment. As a result, the total amount donated to Sri Lanka has reached Rp 22.5 billion.

“Sri Lanka is suffering through a crisis that causes a scarcity of medicines and medical devices. They need help and support from various parties. Therefore, in the spirit of humanity and solidarity, Indonesia provides medical devices and medicines,” said Mrs. Agusdini.

Sri Lanka’s Ambassador to Indonesia, Mrs Yasoja Gunasekera, expressed her gratitude to the parties who had sent the aid. She stated that the support of medical supplies and medical devices is beneficial for Sri Lanka’s condition. The Sri Lanka government will also distribute the assistance to those in need.

Dexa Group is one of nine national pharmaceutical companies participating in donating cancer drugs to Sri Lanka. Two types of oncology drugs, namely Calcium Folinate and Paclitaxel 30 mg, were presented according to instructions submitted by WHO through the Ministry of Foreign Affairs and the Ministry of Health.

“The Dexa Group’s involvement in Sri Lanka is carried out following our core value ‘Deal with Care’ and the company’s CSR platform, Dharma Dexa, as a form of solidarity, concern, and humanitarian mission that has become a shared responsibility. Therefore, as a National pharmaceutical company, we participate in donating two types of oncology medicines produced by PT Fonko International Pharmaceuticals,” said Chairman of Dexa Group, Mr. Ferry Soetikno.

“Sri Lanka has been one of Dexa Group’s export destination markets. Several Dexa Group products, such as Medixon (Steroid), Vometa FT, Remopain, and Glumin XR, are exported to the country and used by doctors for a prescription. As a partner, Dexa Group is obliged to participate in solidarity in humanitarian missions to meet the needs of medicines currently scarce in Sri Lanka due to the economic crisis,” explained Mr. Krestijanto.