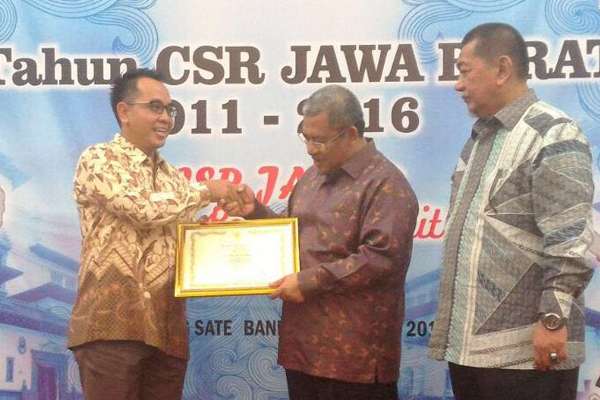 PT Dexa Medica received a CSR Award from West Java Provincial Government in Gedung Sate on Wednesday, February 2, 2016. The award was handed over by the Governor of West Java, Ahmad Heryawan to the dharma dexa Manager, Mateus Ramidi on behalf of the Directors and the Management of PT Dexa Medica. At the awards event, Ahmad Heryawan said that among many pharmaceutical companies, Dexa Medica has been an active partner in the CSR program in the West Java Province.

The event was preceded by a welcoming speech from the head of West Java Bappeda, Jerry Yanuar. Mr. Jerry explained that the CSR award with the title “5 Year of West Java CSR” is a form of appreciation from the West Java Provincial Government to companies that have contributed to the CSR program. The event was also held to gain more knowledge about the CSR program and gather the synergy between local government, companies, and stakeholders.

This year, there are around 78 companies in West Java that will receive plaques of appreciation and 76 epigraphs upon the completion of the big-scale CSR development programs. There were also 47 companies showcasing the product of targeted projects in the west parking lot of Gedung Sate.

According to the West Java Governor, the targeted sectors that are available to be helped by CSR are education, health, economic empowerment, water supply, and other sectors. Besides that, there are companies that took part in the provision of sanitation, garbage banks, and others. Generally, the companies that joined the West Java CSR partners pick an area that is close to their locations. Corporate Communications Dexa Medica