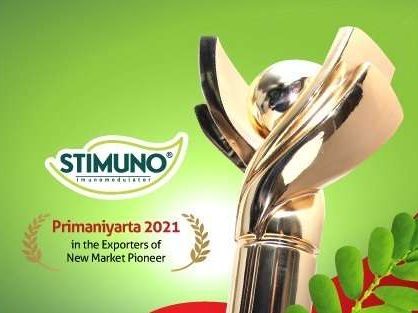 The President of the Republic of Indonesia, Mr. Joko Widodo (Jokowi) gave a speech at the Trade Expo Indonesia Digital Edition. In his remarks, the President emphasized the importance of continuing to innovate and increase competitiveness in the international arena.

CEO of Dexa Group, Mr. Ferry Soetikno, appreciated the Primaniyarta 2021 award from the Indonesian government to Dexa Medica. The award is be in accordance with Dexa Group’s vision as a respected international pharmaceutical company.

“Thank you to the government, public, and all Dexan for the commitment of the core purpose and core values of the company. Through OMAI Stimuno products, we have contributed to the independence of national pharmaceutical raw materials,” said Mr. Ferry.

The Primaniyarta 2021 Award for PT Dexa Medica was received by the Commissioner of Dexa Group, Mrs. Gracianti Soetikno-Pandji.

Primaniyarta is the highest award given by the Government of Indonesia to exporters who are considered the most accomplished in the export sector and can be role models for other exporters. The Primaniyarta award is held by the government regularly every year through the Directorate General of National Export Development, Ministry of Trade of the Republic of Indonesia.

In the New Market Pioneer category at the Primaniyarta 2021 event, there were four other finalists who managed to qualify for the nominations after going through a series of judging processes. Dexa Medica became the best finalist in this category with the Indonesia Indigeneous Modern Medicine (OMAI) STIMUNO product.

The success of Dexa Medica in winning the Primaniyarta 2021 award is due to the commitment and consistency made to penetrate new markets by taking advantage of the pandemic momentum to increase exports. In addition, Dexa Medica has also succeeded in making OMAI worldwide through its STIMUNO product.

Several factors that become important keys are price competitiveness, production facilities with a good quality system and culture, as well as product development competencies that comply with regulations and standards applicable in foreign countries. Furthermore, Dexa Medica able to take advantage of the pandemic momentum to increase exports. Dexa Medica also remains committed to marketing OMAI STIMUNO to Myanmar in the midst of the political and security turmoil, while many companies have temporarily suspended their operations.

This is the fifth year that Dexa Group has received the Primaniyarta award in a row since 2017. Mrs. Gracianti hopes that Dexans will continue to be motivated to improve competence.

“The Dexa Group’s core purpose is Expertise for the Promotion of Health, for that every Dexan must be committed to improving competence so that it is not only better than before, but also better than others, and survives all challenges,” said Mrs. Gracianti.

Operations Director of Dexa International Business, Mr. Anndy Sinarta Sembiring added that STIMUNO has succeeded in penetrating a new market that is difficult but has great potential to increase export value. STIMUNO as OMAI has been recognized and prescribed by thousands of doctors abroad, such as in the Philippines.

“The success of penetrating this new market is because of the support of the Indonesian government and also Dexans both in Indonesia and International. The Primaniyarta award is a motivation to continue to penetrate every export destination market and promote the ‘Gerakan Nasional Bangga Buatan Indonesia’ movement,” said Mr. Anndy.