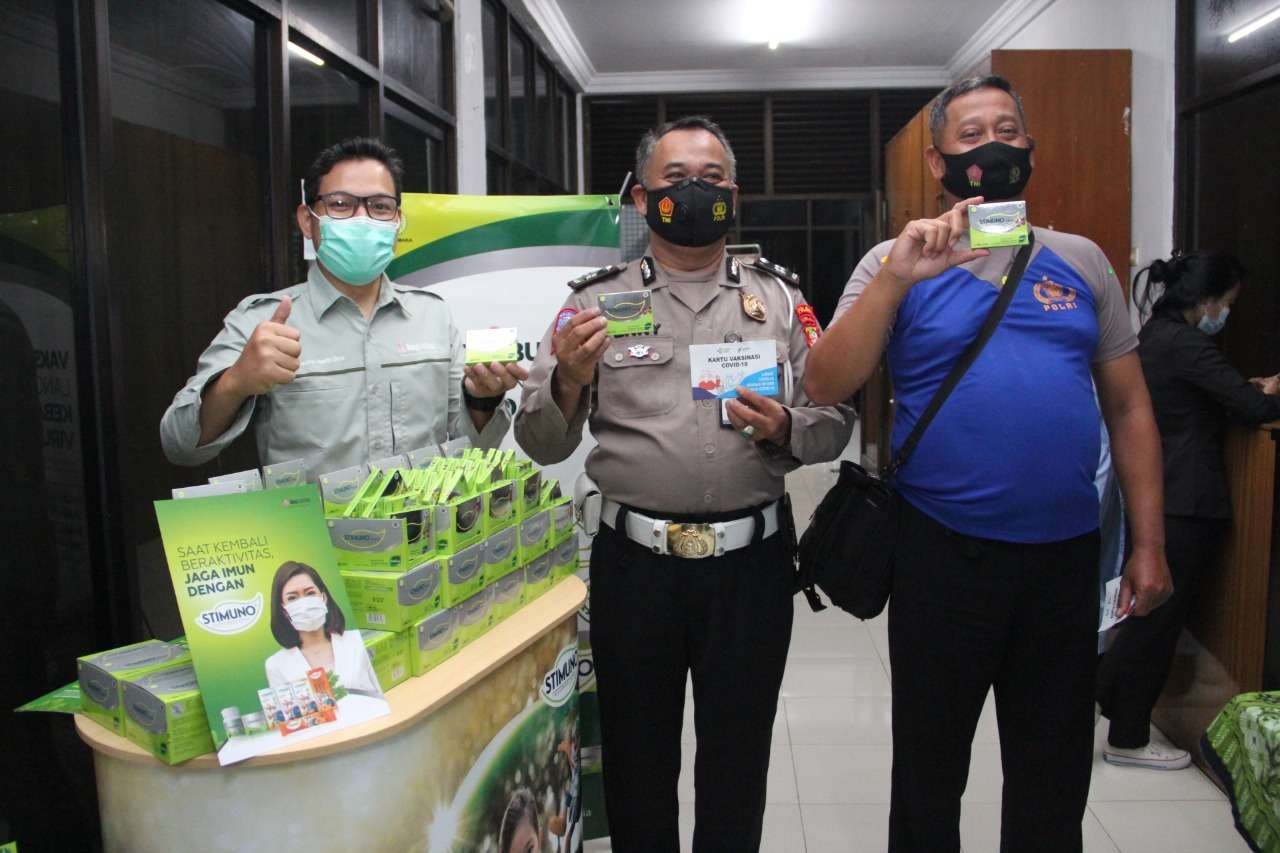 Police officers and health workers as the front line in the implementation of the Covid-19 vaccine need to get maximum protection. In addition to using personal protective equipment (PPE) and implementing health protocols, maximum protection for the body’s immune system also needs to be sought.

Stimuno as an immunomodulator made from green meniran (Phyllantus niruri) which has been certified phytopharmaceutical or has been clinically tested, aside from being given to around 140 vaccinators on duty during the implementation of the vaccine, it was also distributed to around 800 police team personnel who had received vaccinations at that time.

“Maintaining the body’s immunity is important even though it has been vaccinated. Therefore, we also pay attention to the immunity of vaccinators and also members of the police who have received vaccines by using Stimuno as an immunomodulatory product that has been trusted by consumers since Stimuno received phytopharmaca status 17 years ago from the Indonesian National Food and Drug Administration. Because of Dexa Group’s concern, aiming to provide special and maximum protection, the Dexa Consumer Health Team distributed Stimuno for participants, both vaccinators and vaccine recipients from the Polda Metro Jaya team, “said Mr. V. Hery.

“We prioritize personnel who are in direct contact with the community, such as Banbinkamtibmas, traffic officers, and detective inspectors as the frontline guarding Covid-19. For immune protection, we continue to carry out 3M socialization and also the provision of vitamins by Biddokkes,” said dr. Didiet,

As the first immunomodulatory product with phytopharmaca status in Indonesia, Stimuno has been trusted to maintain the immunity of Indonesian families. This is evidenced from Stimuno’s role in maintaining immunity to overcome tropical disease outbreaks such as dengue fever in Indonesia which occurs every year, the MERS infectious respiratory disease outbreak that occurs in the Middle East and related to this has been tested on pilgrims from Indonesia, and currently, Stimuno is being tested on COVID-19 patients for mild to moderate symptoms.

As one of the Original Indonesian Modern Medicines (OMAI) with phytopharmaca status, Stimuno has gone through a series of tests, such as preclinical tests, toxicity or safety tests, and working methods, efficacy tests, and clinical trials in various hospitals in Indonesia.

According to the Director of Business and Scientific Development of PT Dexa Medica, Dr. Raymond Tjandrawinata, in Indonesia, many drugs have been developed from herbal ingredients. Among natural medicines, the green meniran plant has been clinically tested as an immunomodulator.

“It turns out that this meniran is active against various kinds of pathogens. So, both specific and non-specific immune systems can be increased using this native Indonesian plant,” said Dr.

Meniran plants have been through clinical trials for various diseases, one of which is for patients with tuberculosis, hepatitis, acute respiratory infections, and German measles. Dr. Raymond also said that currently being planned for clinical trials of meniran for mild to moderate symptoms of SARSCOV-2 virus infection.